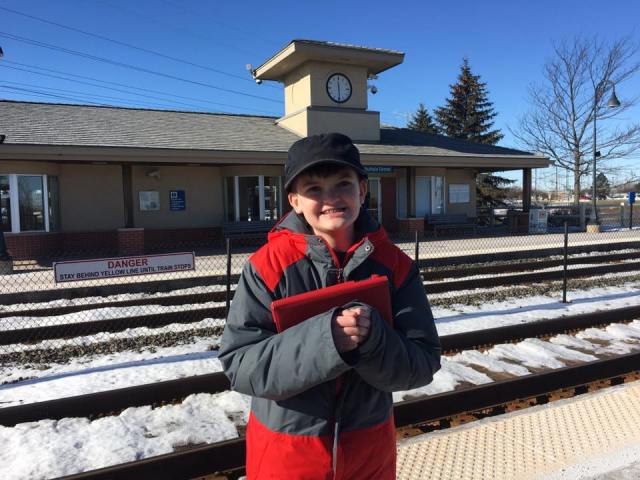 Dr. Martin Luther King Jr.’s birthday. A day off of school, work, a day to remember a great man, a great leader who was taken from us way too soon. I always wonder what he truly would have achieved if he had not died. We have spent the last week learning about Dr. King in the second grade classroom in which I work. I know that my own kids have continued to discuss his numerous contributions to the Civil Rights Movement. Adam has had this day circled on his wall calendar for weeks. He has been waiting anxiously for, I’m sure what seems like forever in his mind.

You see, although Adam loves to learn about events and dates in history, and he has recited many facts about Dr. King,  January 18, 2016 was his next day off of school. His next opportunity to make another pilgrimage to yet another Chicago Metra station. As we are getting in the car, Adam starts going through his scripted dialogue, which I have heard all weekend.

Mom ‘spaced out’ and didn’t take Adam to the Buffalo Grove train station this weekend so we are now going on Monday, January 18, 2016.

Ok, so I need to set a few things straight:

First of all, I didn’t ‘space out’. I have just learned that I need to strategically plan these visits, for, if Adam had his way, visiting Metra Stations and riding the Metra train is ALL  I would do in my free time.

In addition, visiting a particular Metra station once with Adam is never enough. There is always something new to discover, something new to take in. A new detail to digest. Autism doesn’t allow the Metra train or it’s station to get old.

We begin to drive and  Adam says to me:

Huh. How do you know that he loved Metra trains buddy?

I started to speak, but no words exited. My mouth slowly closed and I decided that it was just not worth it. For anything that I would potentially say would be rebutted with one of his classic responses such as ‘mom’s talking was hurting his ears’, or something of the like. It just wasn’t worth it. In his mind, his reasoning made sense, and he’s already moved on. WAY on. We continue to drive in silence. Me, deep in thought, and Adam with his eyes as wide as saucers and an enormous grin on his face.  We have arrived at the train station! One that we have never visited, however, he has studied it’s every minute detail in pictures that he has Googled. He immediately rips off his seat belt before I even get a chance to fully park. He starts stimming; drumming his fingers together in front of his face rapidly, as he often does when he is excited. Once again, I’ve lost him to the Metra. He is not in his right mind.

I quickly grab my hat and gloves,  glance at my car thermometer and note that it reads -3 F. We won’t be out here long…I pray that we are not out here long. Adam’s world stops when it comes to anything to do with the Metra. As I am sprinting to keep up with him, I note that his head moved ever so slightly to the left and right to check for cars. Wha hooo!! He’s finally remembering to check for cars! Or maybe I was just hoping.

After about 20 poses of Adam standing outside the station and 1oo more shots of the various angles of just the station alone, Adam thankfully decides that it really is insanely cold and he makes a run for the car. He once again barely turns his head to look for cars, but he did look a little, right?

He couldn’t get his seat belt on fast enough and immediately starts swiping through his new pictures on his iPad at warp speed. I notice his eyeballs jumping back and forth, up and down, absorbing every detail of those pictures like a sponge. Soon he will be reciting random facts about the number of bricks, how many cracks in the mortar, and the number of shingles this train station contains. I sigh, and smile ever so slightly.

You see, although Adam’s obsession with the Metra train, the Metra stations and the maps of the Metra line can be a bit overwhelming to me at times, it truthfully isn’t. It’s really such a simple thing. All he really ever wants to do on a day off of school is take a leisurely drive to a Metra station, take a few pictures, admire, in his mind, it’s remarkable beauty, and go home.  Going to a Metra station doesn’t cost me a dime,  except maybe a little bit of gas. I get to spend time with my son in the car, listening to his theory and reasoning of why Dr. Martin Luther King loved Metra trains. But most importantly, I get to witness the pure joy on his face, as if I took him to Disney World.

Join 1,413 other followers
Follow Tales From the Butt on WordPress.com